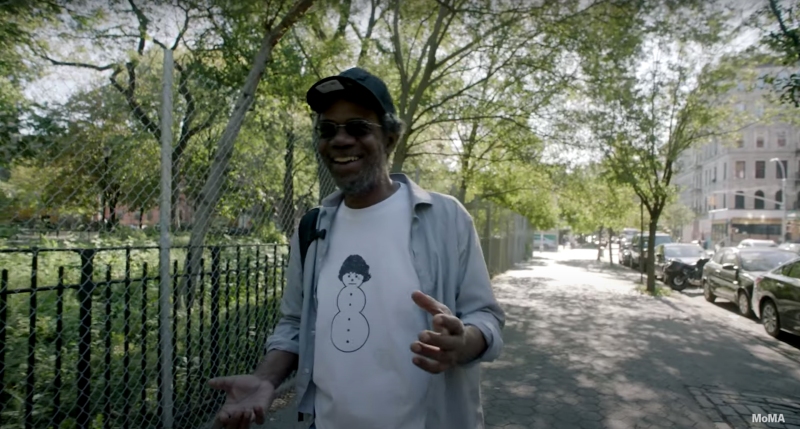 Pope.L, aka, William Pope.L, aka, the self-professed “friendliest black artist in America” guides us around the streets of the East Village in New York City. He’s revisiting the site of a past performance where he crawled on knees and elbows around the streets wearing a full suit while holding a potted flower. He did this to highlight the social inequality and divisions in the United States. As Pope.L says he was concerned with, “where are you in space. Who owns that space”. He talks about the process of crawling. Although this involved coming face to face with all kinds of organic nasties, Pope.L still recommends it as an activity, “It’s kind of uplifting. Crawling, if you’ve never tried it you should”.

The subject of Pope.L’s work confronts a serious social concern. It exists across the world and it’s ongoing. He addresses this problem of inequality in the urban environment as a human concern and he does it with great wit, humour and humanity. I get the feeling this is how he approaches life. Pope.L is very charming. He’s playful, inquisitive and funny. He’s got a nice little chuckle as he describes his work.

Pope.L looks like a normal guy. There’s no pretention. He’s casual but his glasses give him a studious vibe. Don’t be fooled. He’s not playing. Archive pictures of his performance make him look absurd. A surrealist! Why would someone do that? The people on the streets look shocked. But what he did was completely pertinent. The physicality of his performance really highlighted the issues of inequality in the urban environment as a human concern. The power of the work was to take the subject out of academia, out of the note pads of law makers and journalists and place it back in the physical world.

13 Oct This entry was published on October 13, 2020 at 11:18 am. It’s filed under Exploring Process and tagged art, Art is process, artist, Contemporary art, New York, Performance, Performance Art, Pope.L, Protest art, Space, USA, work in progress. Bookmark the permalink. Follow any comments here with the RSS feed for this post.