Inside the mind of #NamJunePaik

Artist Nam June Paik was a leading video artist and helped to bridge the gap between art and technology with his experimental work. Nam was born in Seoul, South Korea in 1932 but travelled extensively including to Japan, Germany and the USA. His work often reflects the traditions of the countries he lived in and draws attention to the connectedness of cultures. In 1974, Nam coined the phrase ‘Electronic Superhighway’ as a way of describing his video work and predicting a global information network. 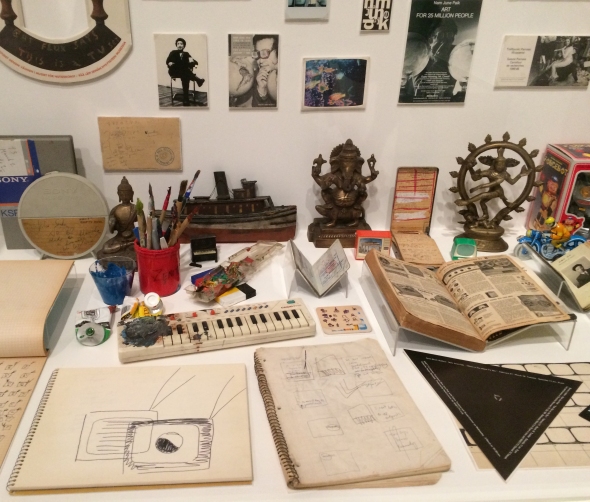 Nam’s work is influenced by the traditions and philosophies of the countries he visited. He collected objects from both Eastern and Western cultures. These were objects which he used for reference and they shed light on his broad interests. They include his address book, notebooks, Casio keyboard, toy TVs and robots. Nam started experimenting with TV’s and audio-visual equipment in the early 1960’s. He used magnets to distort their images as a way of subverting their manipulative power. Nam believed that artists could help make video a more democratic tool for social benefit.

15 Apr This entry was published on April 15, 2020 at 9:49 am. It’s filed under Artists and tagged art, Artists, Contemporary art, Inside the mind of, Nam June Paik. Bookmark the permalink. Follow any comments here with the RSS feed for this post.