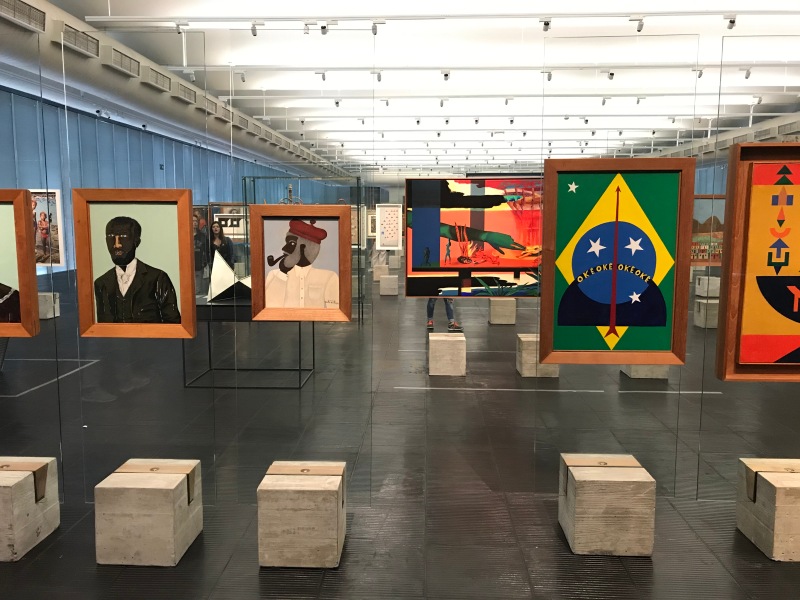 I was lucky enough to visit MASP, the São Paulo Museum of Art, earlier this year. This was my second visit to the museum which is located on Avenida Paulista in heart of the city. The museum is a cultural hub and is instantly recognizable with its modernist architectural style.

The collection is displayed in a unique way. Pictures are held up on panes of glass in supportive concrete blocks on the ground. They are arranged in rows which are spaced out across the main exhibition space. This lets viewers walk around and through the collection of art. It’s a unique experience which gives us an intimate view of each work and one which the museum hopes will “desacralize the artworks and question the traditional model of the European museum”.

I was really impressed with how several artworks in the display confronted Brazilian history and contemporary culture. Here are some of the works of art which I found to be the most impactful; 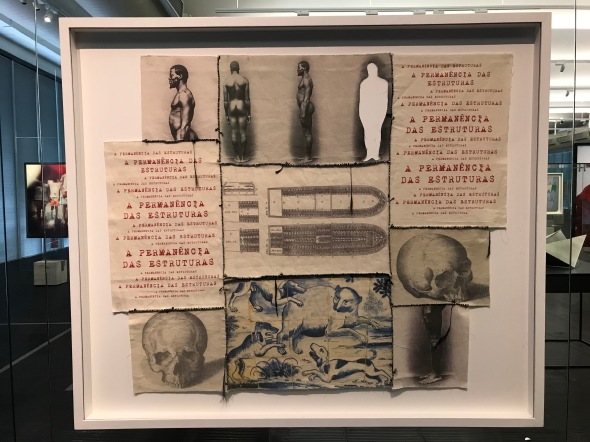 ‘A permanêcia das estruturas (The Permanence of Structures)’ by Rosana Paulino, 2017, digital print on fabric, cut out and sewing

This artwork by Rosana Paulino is an assemblage of reproduced images and texts which have been sewed together. The images have been appropriated from infamous sources which depict, record and are related to the slave trade in Brazil. They include James Phillips’s ‘Plan and Sections of a Slave Ship’, Auguste Stahl’s snapshots of naked Afro-Brazilian men, images of Portuguese tiles and texts and images of skulls alluding to the pseudoscientific practise of Phrenology. These images are shocking and a record of enduring systems of inequality and prejudice. Rosana has reconfigured these reproduced images in the work. Figures have been cut-out, removed and dissected. Images have also been arranged in a grid format and are connected together with fraying, black string. This further emphasises the inhumanity of systems used to observe, objectify and commodify human beings as slaves. 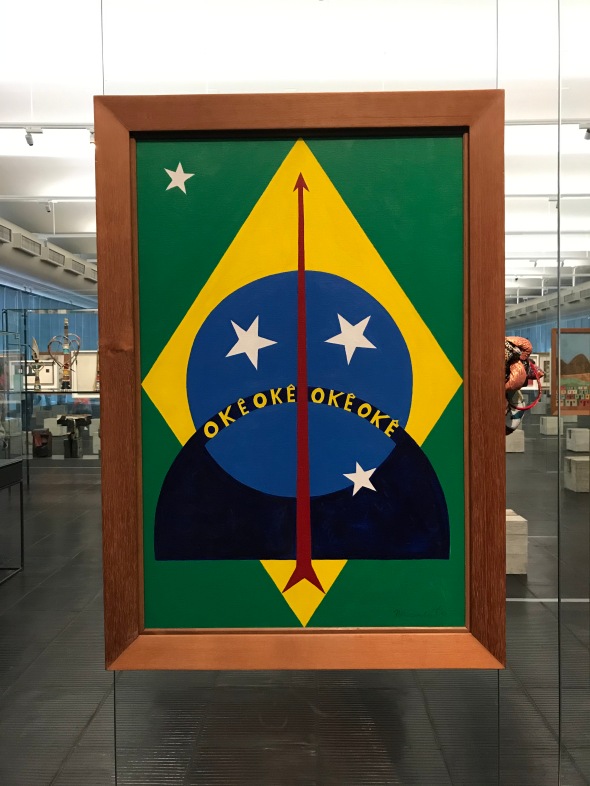 Okê Oxóssi reinvents the famous green, yellow, blue and white flag of Brazil. The traditional flag format has been flipped to a portrait layout and the famous motto; ‘Ordem e Progresso’ has been replaced with the Yoruban word; “Okê”. The image now resembles a portrait of a person with an emoji style unhappy face L. “Okê” is a Yoruban word used by the community of Yoruba people based in Western Africa. The Yoruba people suffered forced migration to countries around the world, including Brazil and the UK, due to economic and political changes including slavery. 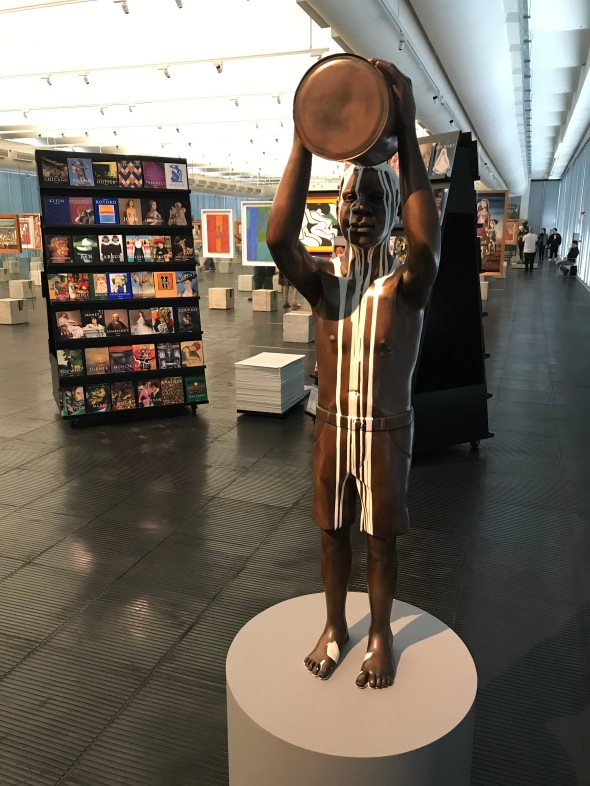 This sculpture by Flávio Cerqueira depicts a young Afro-Brazilian boy pouring a tin of white paint over himself. It’s a striking and surreal act to come across in an art museum. The sculpture was made in bronze and literally depicts an act of whitening. Amnésia refers to a period in Brazilian history where white, European culture was placed above all others. Social and cultural whitening were prevalent in Brazil during the 19th century. Amnésia contests this narrative. As the white paint runs out, Flávio’s sculpture stands as a symbol which satirizes this social and cultural hegemony. 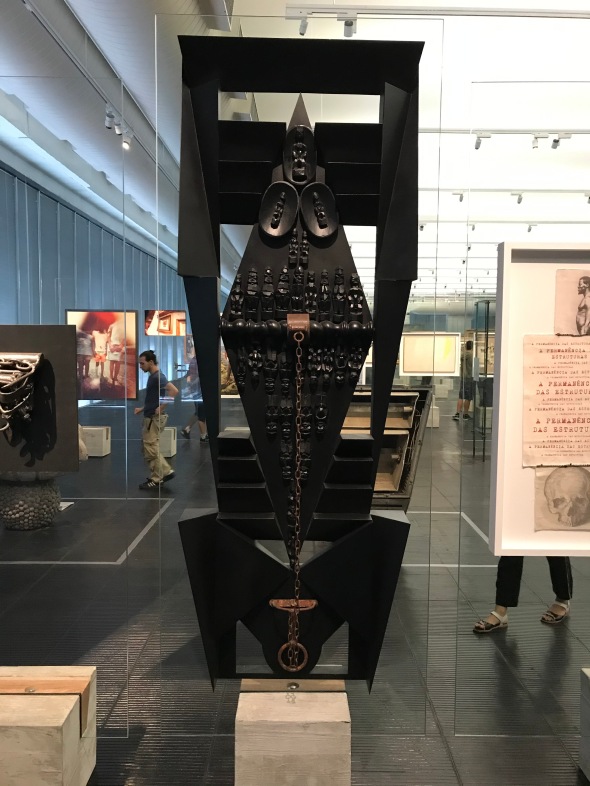 O navio is an imposing wooden sculpture created by artist Emanoel Araujo. The work has been carved from wood, painted black and arranged in a geometric form to represent the cross-section design of a slave ship. The scale and directness of the work is imposing and it dominates the immediate space. The details of the work are also emotive. They include a metal shackle which hangs sinisterly from the central form of the sculpture. Carved figures are laid out in ordered rows to mimic the bodies of slaves piled up in ship holds. They also reference traditional Yoruban art. O navio is an emotive work. It is bold, direct and powerful. 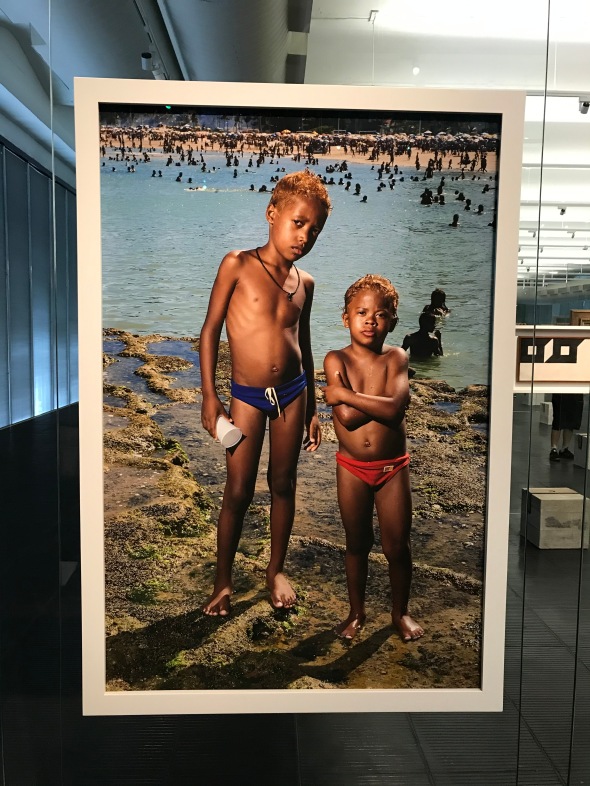 This work is a photograph of two young boys posing while spending the day at the beach. It is a typical Brazilian beach scene. The work is part of a series of photographs titled Brasília Teimosa (Stubborn Brasília). The series explores social life in the city of Recife in the north-east of Brazil and the social divisions which exist on the beach and in Brazilian society. The photograph captures areas of the beach designated only for the wealthy and areas separated for working class people. Many of the local people who visit the beach live in favelas or slums. During the 1950’s the local government repeatedly tried to remove them from the area only for the working-class community to resist. They eventually gained the right to remain after a long struggle. The boys symbolize this fight and way of life with their swagger and defiant demeanour.

Emiliano Di Cavalcanti is one of Brazil’s most famous modern artists. This portrait is full of vibrant colours and exciting decorative forms. The title of the picture references a derogatory term which was frequently used to describe Afro-Brazilian women. The sitter in this portrait is a young Afro-Brazilian woman. Her pose is upright and confident. She is assured and gazes directly at us.