A brand-new exhibition at the Whitechapel gallery presents a major survey of work by Iraqi-American artist Michael Rakowitz. He first came to prominence in the 1990’s and his artwork draws on complex histories, politics and cultures of various different communities. Rakowitz works across mediums and often creates large scale installations which include sculpture, carving, drawing, film, audio, photography and documentary material. These installations are the result of extensive production processes and investigative work which are presented as singular works of art, environments and findings. In this new exhibition, Rakowitz presents eight installations made over two decades which draw on a wide range of influences. The show also coincides with the display of an artwork from his series, ‘The Invisible Enemy Should Not Exist’ on the Fourth Plinth in London’s Trafalgar square.

A major theme which links the work in the exhibition together is architecture. Rakowitz explores surprising connections between the social and historical contexts of selected buildings, objects and sites. In the first room of the show we are presented with an inflatable model of a social housing building. The piece is part of ‘Dull Roar’ from 2005 which pits two architectural models against each other. One inflatable model of a failed social housing project in St. Louis, Missouri is overlooked by a model of Vladimir Tatlin’s unrealised utopian tower. The inflatable building keeps rising and falling into a heap of plastic on the gallery floor as the sound of a humming air pump turns on and off. The piece is in constant transition. This could be an optimistic metaphor or continuous playful critique on the failure of modernist ambitions. 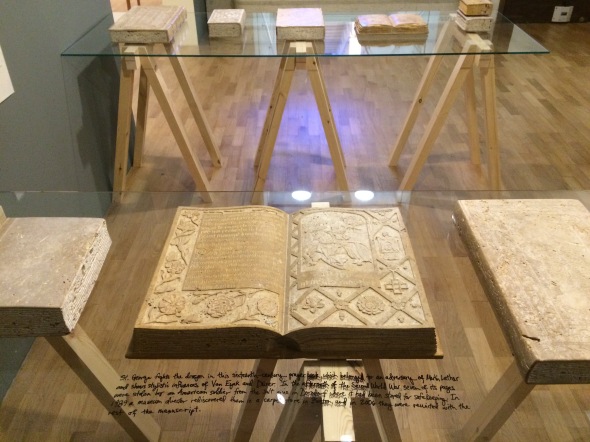 In the next room, several beautifully carved stone books are displayed on glass tables across the space. ‘What dust will rise?’, 2012 presents a series of stone carved books on glass tables and a number of display vitrines containing artefacts and fragments. The beautifully intricate carvings were created by Afghani and Italian craftsmen. They recreate many of the books which were lost in the second World War using the craft of stone carving which was also banned in Afghanistan by the Taliban. Nearby there are only fragments and dust which were recovered from sites including the Bamiyan Buddas in Afghanistan. These have been presented in old museum style display vitrines which Rakowitz has handwritten on with a commentary of the contents. This commentary further adds to enhance the sadness of the loss of these objects to the local communities and the world.

Rakowitz is a huge Beatles fan and he pays homage to the legendary English band in the first room of the upper gallery spaces. ‘The Breakup’, 2010 – ongoing, is a charted comparison between the breakup of the Beatles and the dissolution of Pan-Arabism. The display presents a video of a Beatles tribute band and display tables filled with Beatles memorabilia mixed with magazines and journals reporting the Arab-Israeli conflict. The glass table tops have handwritten commentary from Rakowitz which draw connections between a failed plan for a Beatles reunion tour in North Africa and the war in the Middle East. These surreal juxtapositions reveal the strange unrealness of pop culture in comparison with the human cost of war.

‘The invisible enemy should not exist’, 2018 © Michael Rakowitz

‘The Invisible Enemy Should Not Exist’, 2018 includes life-size reconstructions of ancient Assyrian sculptures from the Northwest Palace of Nimrud made with contemporary Iraqi food packaging. The original sculptures were infamously destroyed or damaged by ISIS in 2015. These new works have a bright and vibrant colour scheme and even include the damaged sections of the original sculptures with black areas of packaging. The installation is displayed in a tight L-shaped gallery and includes gaps to represent the looted or totally destroyed sculptures. Reactions from the local community have been recorded and displayed as quotations below the works. The vibrancy and decorativeness of the works sharply contrasts with the empty space and blank walls. As the title of the artwork suggests it is the absence of the original sculptures and the perpetrators of the destruction which is the most chilling aspect of the work.

From ‘The Visionaries’, 2006 © Michael Rakowitz

‘The Visionaries’, 2006 concludes the exhibition and again explores the utopian and aspirational quality of architecture. Suspended viewing booths are positioned around the gallery space. We enter through low doorways into the square shaped booths. Inside there are photographs of urban Budapest pinned up and superimposed with architectural sketches. The sketches have been drawn by Rakowitz based on the suggestions of local people. They are illustrated ideas of how to improve the city which had been left with areas of empty lots, demolished buildings abandoned urban regeneration projects since the 1940’s. A sketch of a child playing on a swing pasted over a derelict looking building complex reinforces the need for environments which mean something to people and support their communities.

The show ends where it started; between an optimistic metaphor and a continuous critique. Rakowitz wants to show us the duality and constant tensions inherent in social fabric. Things are not always as they seem on the surface and Rakowitz’s investigative documentary work illuminates the complexities. There is a tension which runs through the work in the show and this is set up by the acknowledgement of the presence of opposing forces in all things. This could be between creation and destruction, life and death, ancient art and pop culture. There is no resolution. It is all circular. This show will really test if you’re a half glass full or glass half empty person.

The show is now open and continues to the 25th of August 2019 at the Whitechapel Gallery.

The exhibition tours to Castello di Rivoli Museo d’Arte Contemporanea, Rivoli – Turin from 7 October 2019 to 19 January 2020 and to the Jameel Arts Centre, Dubai from 12 March to 30 August 2020.