Hip-Hop and Fine Art have not always been considered as close artistic allies, but they have both become dominant forces in popular culture. Both genres have created their own traditions and influenced a broad range of art forms.

In this three part blog I’m going to explore the influence of hip-hop culture in contemporary art. I want to investigate this cultural exchange in order to draw parallels, explore differences and similarities in artistic intent and production. Taking three key visual artists I’m going to examine where and how the key elements of hip-hop come through in their art.

Hip-Hop is best known as a genre of music but it also includes other art forms. As a cultural movement hip-hop has a strong visual identity. Legendary DJ Afrika Bambaataa included graffiti art as one of the core elements of hip-hop culture. Responding to the urban environment is a key theme that connects hip-hop and fine art. The artist Jean-Michel Basquiat started his career as a graffiti writer and street artist in the Lower East Side of Manhattan, New York in the 1970’s. He worked with his friend Al Diaz to spray paint satirical slogans and statements on buildings in Lower Manhattan. Their graffiti writing gained notoriety and they became collectively known as SAMO (same old as in same old shit). After SAMO Basquiat went on to become one of the most famous visual artists of the twentieth century.

Basquiat’s work fuses a street art style with a mix of expressionist colours and collaged social commentary. He explored social conditions and critiqued social, political and historical systems in his work. As part of his practise Basquiat consumed knowledge and ideas. These influences spill out into his work. He sampled visual imagery from encyclopaedias, reference books and tv. He remixed these visual ideas in his drawings and paintings and often juxtaposed these with contrasting images to set up complex and sophisticated narratives in the work.

‘Toxic’, 1984 depicts the cropped portrait of the figure of a black man with a blue hat and red hands. The figure has been painted on top of a collaged background of photocopied drawings and loose patches of white paint. The man looks as though he has been caught by surprise. His hands are held high in the air as though he has just been stopped by the police.

As with ‘Toxic’, Basquiat’s work explores institutional racism and social inequality. His work embodies hip-hop with its raw energy, celebration of popular culture and directness. If Basquiat’s artwork was a hip-hop track it would have a deep-bass layer of expressionist brushwork overlaid with street art percussion and a socially conscious rap. 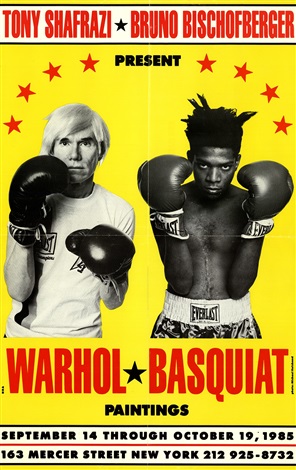 Grandmaster Flash is another artist who depicted conditions in the urban environment. In the ground-breaking track ‘The Message’ from 1983, Grandmaster Flash and the Furious Five use lyrics which vividly describe the hardships of living in the city.

“Broken glass everywhere
People pissin’ on the stairs, you know they just don’t care
I can’t take the smell, can’t take the noise
Got no money to move out, I guess I got no choice
Rats in the front room, roaches in the back
Junkies in the alley with a baseball bat
I tried to get away but I couldn’t get far
‘Cause a man with a tow truck repossessed my car